The real core of a market's strength or weakness is supply and demand. Let's use a simple example:

You have a lemonade stand on a street corner and you buy 30 pounds of lemonade powder for the weekend.

Scenario 1: There are 10 other lemonade stands on your street. One person buys a cup of lemonade from you for $1. You still have like 29 pounds of lemonade powder. That is lots of supply, and no real demand. You are losing money. You will probably need to shut down your business soon. (This is what was happening in 2008.)

Scenario 2: You are the only lemonade stand on the street and have a line down the street waiting to buy from you and you sell out quickly in 1 day - people are willing to pay $10 to get a cup of lemonade from you. There is a lot of demand, and not enough supply. You can even open up a second and third stand and still have plenty of buyers. You may become rich. (This is what is happening in Denver right now.)
And say for some reason in Scenario 2 more and more people kept coming to your street each week because they hear how good the lemonade and weather are. You will have even more demand.

In short: Back in 2007 we could see clues for the recession and the bubble burst because of such high supply of homes for sale, and not enough demand. But today the demand is so high, and supply is so low (and has been for 4 years), and rents are so high, that the demand itself is showing hard evidence of economic thriving in the Denver housing market for years to come, especially since 50,000+ people move to Denver each and every year. 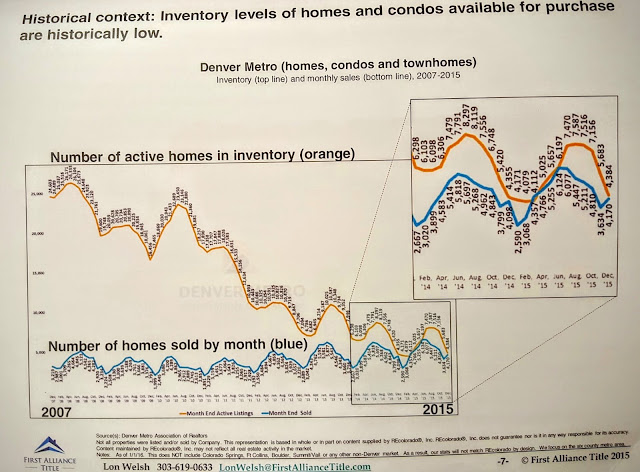 Future Home Values: Where Do The Experts Think They are Headed? 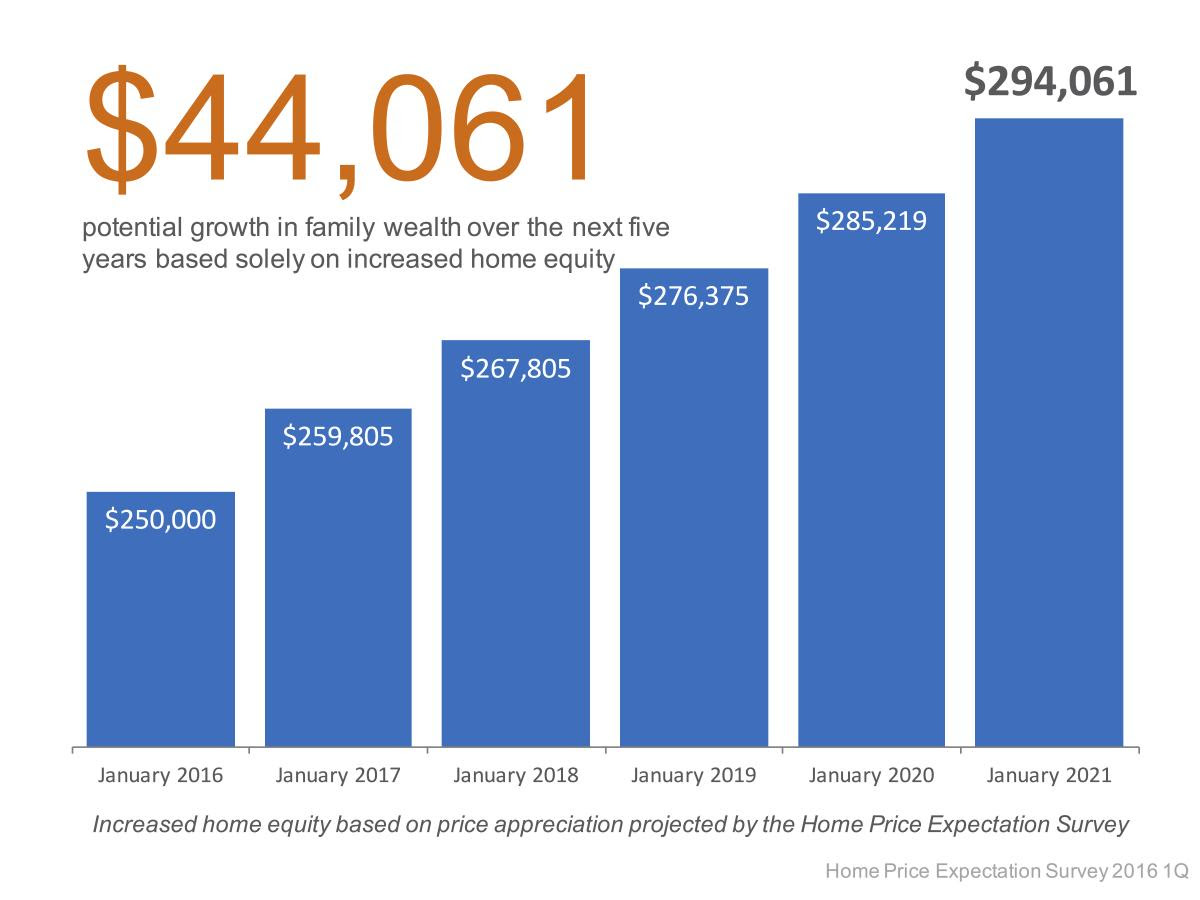 Today, many real estate conversations center on housing prices and where they may be headed. That is the Home Price Expectation Survey of over 100 economists is so great.

Every quarter, Pulsenomics surveys a nationwide panel of over one hundred economists, real estate experts and investment & market strategists about where they believe prices are headed over the next five years. They then average the projections of all 100+ experts into a single number.

Here are the results of their latest National survey (Denver is much hotter than this): 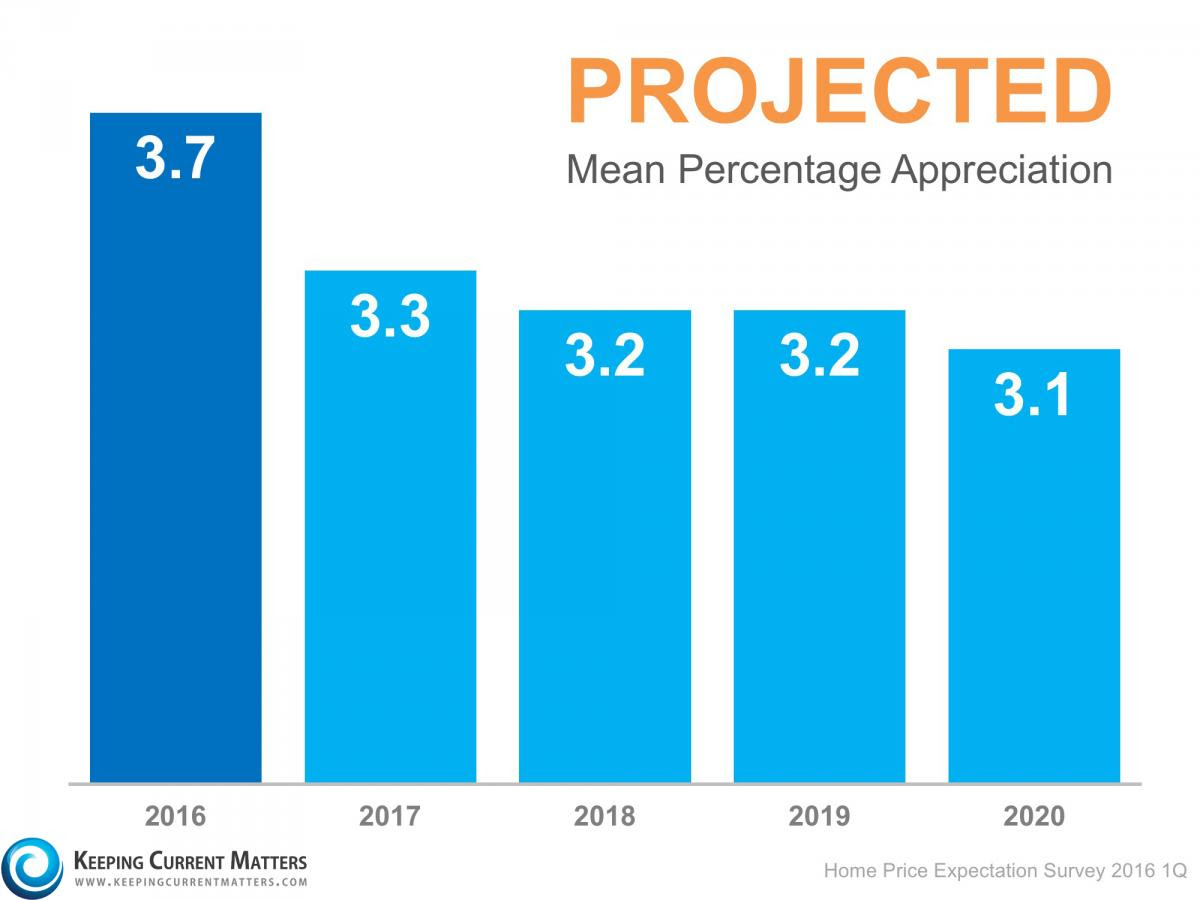 **These rates are only an indication of current market conditions**
Assumptions include the following loan characteristics:
•    $200,000 loan amount
•    $250,000 sales price
•    Conforming and Government products: $320,000 loan amount, $400,000 sales price
•    Jumbo Assumptions: $800,000 sales price, $600,000 loan amount.
•    "Excellent Credit" - 740 fico score
•    Owner Occupied
•    Single Family Residence
•    Colorado Property
•    Collecting impounds
Disclaimer: This is NOT a good faith estimate and should not be relied upon. Request a written good faith estimate.  FEES Estimate are LENDER FEES only. Third party fees, including, but not limited to appraisal, credit report, and title fees are not included in the fees estimate.
Posted by Jonathan at Tuesday, March 22, 2016

Check out this incredible 20-year appreciation map of metro Denver. No surprise that central Denver has appreciated the most, many neighborhoods over 300%+. But the entire Metro area has and is appreciating well!

Check out your neighborhood! U.S. News World Report today unveiled the 2016 Best Places to Live in the United States. The new list ranks the country's 100 largest metropolitan areas based on affordability, desirability, value, job prospects and quality of life. Denver, Colorado, is named the No. 1 place to live on the inaugural list, followed by Austin, Texas, at No. 2. Fayetteville, Arkansas, and Raleigh-Durham, North Carolina, take the No. 3 and No. 4 spots, respectively. A second Colorado city, Colorado Springs, rounds out the top five.

The 2016 Best Places to Live ranking was determined in part by a public survey of thousands of individuals across the U.S. to find out what makes a place desirable to live in. The methodology also factors in data from the United States Census Bureau, the Federal Bureau of Investigation and the Bureau of Labor Statistics, as well as U.S. News rankings of the Best High Schools and Best Hospitals.
"The Best Places to Live ranking accounts for the most important concerns people have about where to live, such as cost of living, employment opportunities and access to good schools," said Miriam Weiner, product manager for Real Estate at U.S. News. "Top-ranked areas not only have steady job markets, but they also have attributes that contribute to a high quality of life – affordability, low crime rates, shorter commute times and quality health care."
Roughly two-thirds of the U.S. population lives within one of the metropolitan areas on the Best Places to Live list. Among these cities, some smaller ones in the middle of the country make a notably strong showing.
With a close proximity to Denver and the Rocky Mountains, Colorado Springs ranks in the top 10 because it is viewed as a desirable place to live. The ranking said Denver residents are "an easygoing crowd of ambitious, progressive-minded fitness fanatics and nature lovers who are eager to push the envelop on everything from civil rights to drug laws."
It also says Denver has some of the best winter weather in the country, a popular misconception. "Those unfamiliar with the Mile High City may think that winters are bad, but Denver usually experiences bright blue skies and powdery snow that melts by noon."