Trulia: Buying a home is 45% cheaper than renting 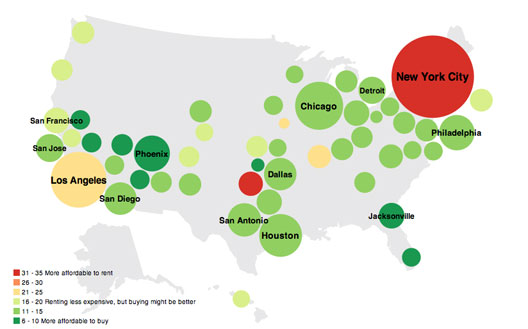 It's more affordable to buy a home than to rent in the 100 largest metros in the nation. That's the case if you plan to stay in the home for seven years, which is the average time Americans traditionally live in a home before moving.
The findings come from real estate data provider Trulia, which conducted a study of key market factors impacting the cost of homeownership. Based on asking prices and rents from the summer, the company claims that, on average, buying is 45% cheaper than renting those areas. That’s a savings of $771 a month.
Trulia Chief Economist Jeff Kolko cites the faster pace of rent hikes versus those of home prices.
“Asking home prices have started to rebound and have risen by 2.3% year-over-year in August (3.8% excluding foreclosures); however, rents have risen more (4.7%),” Kolko notes. “This means that prices are lower relative to rents than they were a year ago.”
“But more importantly, mortgage rates have fallen,” he adds. The 30-year fixed-rate mortgage sits at 3.55%, hovering only six basis points above the record low average hit in July.
To calculate whether renting or buying costs less, Trulia assumes people can get a low mortgage rate of 3.5%, itemize their federal tax deductions, are in the 25% tax bracket, and will stay in their home for seven years.
However, how much cheaper it is to buy a home than to rent depends on where you live.
Buying is 24% cheaper than renting in Honolulu, 28% cheaper in San Francisco, and 31% cheaper in New York, Trulia found. (Click on the map below.) Homeownership is even more affordable in Detroit, where buying a home is 70% cheaper than renting, and 63% cheaper in Oklahoma City and Gary, Ind.
With a higher mortgage rate (4.5%), failing to itemize and a shorter time horizon (five years), Trulia says renting becomes cheaper than buying in New York, San Francisco, San Jose, Calif., and Honolulu. Buying remains cheaper than renting in the other 96 out of the 100 largest metros.
If buying is so inexpensive relative to renting, why aren't more people doing it? Kolko responds that high unemployment is preventing people from saving for a down payment.
“And keep in mind, in the metros where the cost of buying is less than half of what it would cost to rent over the long term, it still takes years to save enough for a down payment,” he says. “It may be 56% cheaper to buy than to rent in Denver, for instance, but it takes more than eight years to save enough for a down payment there.”
Posted by Jonathan at Thursday, September 27, 2012